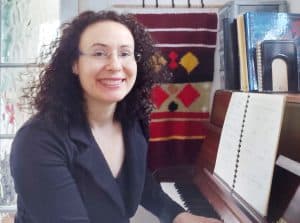 Sarit received her Master of Music Degree in Choral Conducting from the University in British Columbia School of Music, Vancouver, Canada, and her Bachelor of Music Degree in vocal performance from the University of Tel-Aviv School of Music in Israel. At the age of 18 Sarit was awarded a diploma in piano from the Jerusalem Conservatory of Music, and shortly after won the status of an ‘excellent musician’, serving in the Israeli Defence Forces as a singer and a pianist.

Sarit studied conducting under Graeme Langager, Noam Sheriff and Avner Etay and received vocal training from Michela Sburlatti, Giovanna di Rocco, Liliana Pacinotti, Patrizia Gracis, Tamar Rachum and Hadassa Ben-Haim. She has performed as a soloist both in Israel and Italy and was the artistic director of the Vivaldi Chamber Choir and the Jewish Vocal Ensemble in Vancouver, BC, Canada.

In 2004 Sarit sang as a soloist in front of Pope John Paul II at the Vatican in Rome. She founded the Anashim choir, a women’s choir in Sardinia, Italy, and both the International Choir and the JCC Vocal Ensemble in Vancouver, BC, Canada.

Sarit’s recent composition, Sim Shalom, was performed by the St Martin’s Voices at St Martin in the Fields, London, and was broadcast live on BBC Radio in January 2022.

Sarit is currently musical director of the Wimbledon Synagogue Choir and the Larkhill Choral Society, as well as continuing her role as a music teacher and a performer.

Sarit joined the Odds as musical director in January 2023. Margery’s predecessors as accompanist for the Odd’s 24 years to 1984 included Fred Titherington, Colin Campbell and Colin Wilson. Margery has played the piano both performing and accompanying since before her teens. Her piano teacher’s brother (Johnny Dankworth) did offer to teach her the clarinet – there’s a thought!

Margery graduated as a teacher from the Royal Academy of Music although her real wish was to accompany. While she was being coached by Professor Maria Donska in the 1970’s, Margery taught on Saturday’s at the Royal College of Music. In the 1990’s she was coached by Peter Element of the R.C.M.

Margery’s first year as a teacher was in Peterborough, where besides music, she taught tennis, netball and diving! After marrying Don she taught at Ilford and successfully conducted the school choir from the piano.

Don joined Solatron in Dorking, so Margery taught music and technical drawing at Leatherhead but Solatron quickly moved to Farnborough, so in September 1962 they moved with their year-old daughter to Church Crookham. within a month Margery was the accompanist for the Waverley Singers (which she was for 25 years). In many concerts the Waverley’s included a piano concerto for Margery to be the soloist. She was also a soloist for the R.A.E. Orchestra.

In November 1962, Margery joined Pax Hill (Finishing) School for Girls to teach piano. When Pax Hill was sold she joined the Hampshire Peripatetic Music staff to teach piano at a number of Rushmoor schools each week as well as to perform all over the County with other instrumentalists. When the organisation of peripatetic work changed in 1986 Margery applied to Lord Wandsworth College (south of Odiham) where she continues to teach piano at all grades and Diploma.

In 1984 Margery was invited to be the Odds accompanist and for a couple of years she accompanied both the Waverley Singers and the Odd Fellows.

In 1987 with kids grown up and parents deceased, Margery (with Don) tried skiing and cycling which has taken them around the hillier bits of Europe, USA, Canada and New Zealand but they still love taking their dogs to the Lake District. They try to keep fit at Cannon (Nuffield Heath) in Weybourne where, in 1997, a trainer cajoled Margery into running which has led to her running, for charities, the 2001 London Marathon and the 2002 and 2004 New York Marathons.