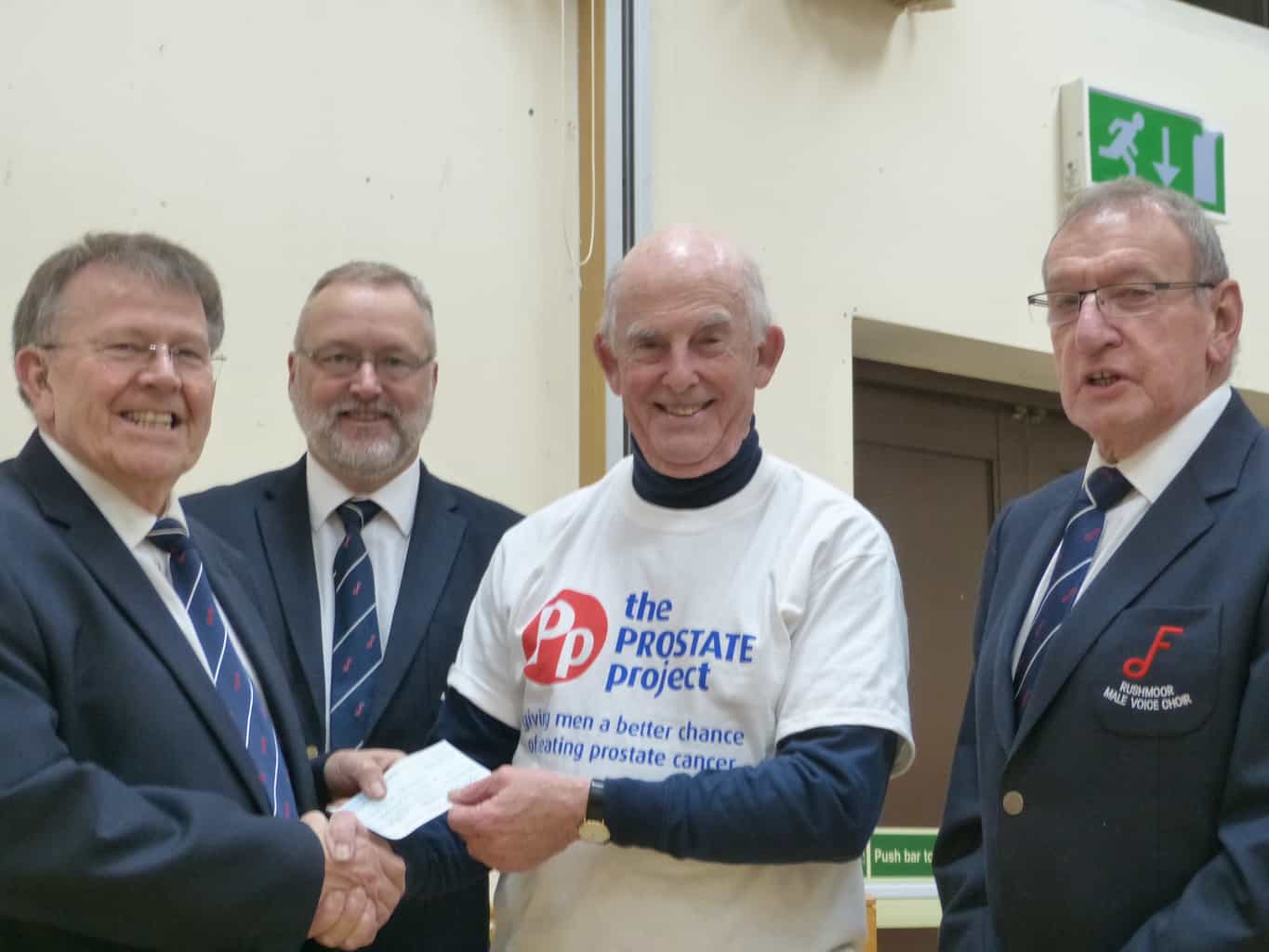 January 29, 2019– At their recent rehearsal, the Rushmoor ‘Odd Fellows’ Male Voice Choir presented a cheque for £1,500 to the Prostate Project for their PSA Testing Day Appeal.

This sum was raised at a Farnham Maltings Christmas concert at which the charity announced the new appeal. Peter Viveash, Chairman of The Rushmoor ‘Odd Fellows’ Male Voice Choir, presented Tim Sharp, President of The Prostate Project, with a cheque of the proceeds from a concert held at Farnham Maltings in December.

The choir, conducted by Musical Director Stephen Petch and accompanied by Margery Wakefield, entertained the audience with a wide repertoire including popular and classic songs, show tunes and a number of Christmas items. They were joined by Vocal Point; a small chamber choir populated by talented amateur singers and led by Sue Piggott, a professional singer, who has performed in the US and UK with many leading conductors. Vocal Point included a particularly moving reading of a letter home from the WW1 trenches mentioning the Christmas football match and which concluded with ‘Silent Night’ sung in both German and English.

At the presentation, Peter Viveash commented “We have always been very impressed with the work of The Prostate Project that aims to give men like us a better chance of beating prostate cancer. It was a privilege to have Tim use our concert to pre-announce their latest project to run drop-in testing days in our area so that more than 1,000 men who would not normally go to their GPs will be tested. I am sure a number of our members will benefit!”

On receiving the cheque, Tim Sharp said “We are so grateful to the Rushmoor ‘Odd Fellows’ Male Voice Choir. They have been wonderfully loyal supporters of our work for many years and this joyous evening of singing was the perfect opportunity to launch our ‘new PSA Testing Day Appeal. We hope to run 10 drop-in testing days in 2019 throughout the South East NHS Region attracting up to 120 men to each day. Experience has shown us that men who would never normally visit their GP, either through embarrassment or fear of the dreaded DRE (digital rectal examination) will come along to a group drop-in blood testing day. We are targeting men aged from 50 to 70. Our appeal strapline is “Don’t bury your head in the sand. Have a PSA test and stop worrying about prostate cancer” Less than 3% of men tested will require treatment.”

Anyone wanting to fund out more about the appeal or register to be tested can do so via the Prostate Project website at www.prostate-project.org.uk. The charity has recently completed a £5.8million joint funding initiative to build a world-class Urology Centre at Royal Surrey County Hospital in Guildford. Men, women and children with urological problems will now benefit from the finest care available anywhere in the UK.

The Choir will be performing a number of concerts over the coming months, including participating in the annual Farnham Flash Festival in June for the third year running. Details can be found on the choir website at rushmoormvc.com.